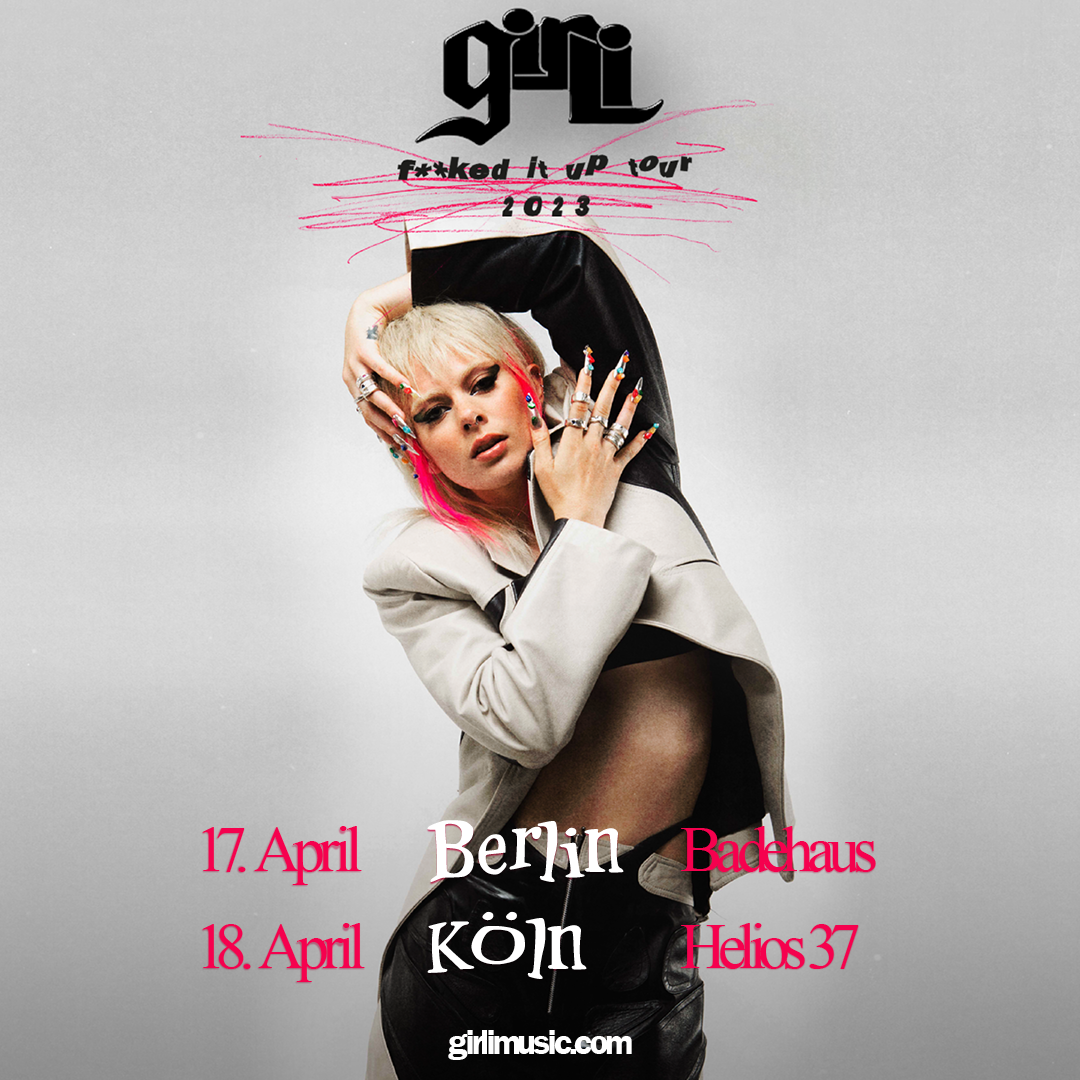 GIRLI ANNOUNCES HER FIRST EVER US & EUROPEAN HEADLINE SHOWS!

Following the successful launch of her most unapologetically pop era yet, girli has announced her first ever US and European headline dates for 2023! Kicking things off at Brooklyn’s Baby’s All Right on 9th March, the pop songstress will make stops in Chicago and LA, before working her way around cities in Europe. girli will then wrap the tour up in the UK, playing Manchester, Glasgow, Birmingham, Bristol and finish things up at London’s Scala on 26th April. Tickets are on sale 10am local time on Friday 7th October here.

girli revealed the stunning visuals for latest single, I Really F**ked It Up last week. The video, directed by the highly-regarded Kassandra Powell, showcases girli as we’ve never seen her before. She performs full choreography alongside three dancers who embody the toxic parts of herself. Watch the video here.

girli’s new era-defining glam and wardrobe complement a stunning creative directed by the inspirational Fiona Garden (Wet Leg, Years & Years, Grimes and more). Milly Toomey (AKA girli) has been on an explorative journey of self-discovery, only to conclude that she can’t be boxed in. The singer-songwriter had been questioning who she was and had put so much pressure on knowing the answer, but soon realised it’s okay to not always know. To mark this epiphany, girli wrote the music she has always wanted to release, and one of the outcomes is I Really F**ked It Up.

In celebration of girli’s new exciting chapter, she will headline two sold out nights at Hoxton’s Folklore; tonight and tomorrow night. This will give fans the rare and special opportunity to see girli play up close and personal, at an extremely intimate venue ahead of further anticipated tour announcements. The London-based artist has been making waves internationally this year; she has played festivals including Pukkelpop, Sziget and Waves Vienna plus Prague Pride and TwitchCon in Amsterdam.

Last year saw girli play a UK headline tour in celebration of her EP release, Damsel In Distress, which can be heard here. She hired an all women and non-binary crew, made and decorated her own stage backdrop, and made sure it was extremely covid-safe so she could chat and meet fans after the shows. The 5-track EP explores themes such as unrequited love, body dysmorphia and self-discovery. The EP has surpassed 40 million streams on Spotify alone, and features girli’s most-streamed track, More Than A Friend (40 million combined audio and video), which was also a viral queer anthem during Pride month last year. The EP also features previously released singles Ruthless, Ricochet, Dysmorphia plus I Don’t Like Myself.