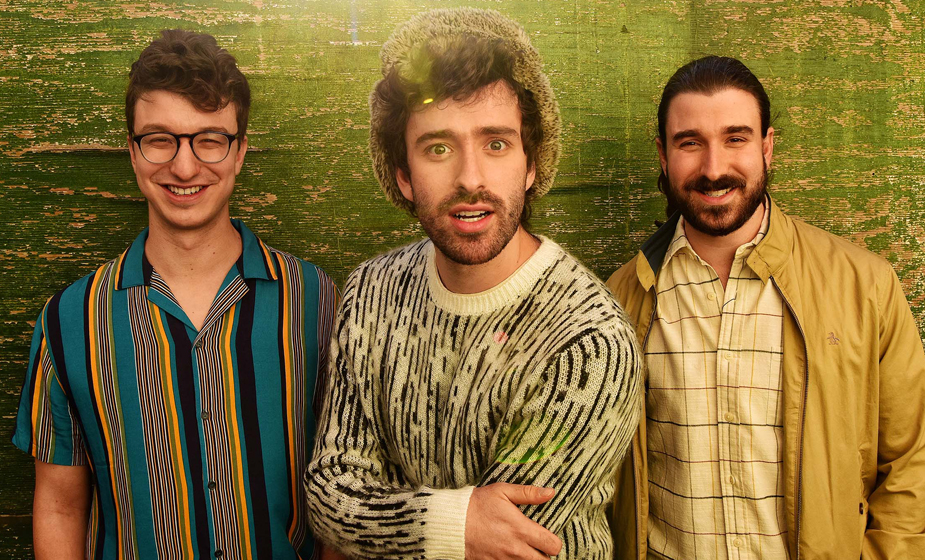 It could be the setup for a timeless fairytale or the synopsis of a long-lost eighties fantasy flick on VHS… Three brothers form a band, they write, produce, and record music in their living room, and they end up unlocking a magical world unlike anything else out there. Those brothers comprise multiplatinum indie pop trio AJR, and that world opens up like never before on their fourth full-length album, OK ORCHESTRA [S-Curve/BMG]. Brushstrokes of intricate alternative rock, hummable pop, and Broadway bombast bring this place to life in technicolor as the band—Adam [bass, vocals], Jack [vocals, guitar], and Ryan [ukulele, piano, vocals]—amplify every element of their sound. “We really tried to create a world on this album,” affirms Ryan. “With each record, our fanbase has grown steadily. Their support made us more confident to invite them into this space. We really embraced who we are, and it’s the most diverse album we’ve ever made. It’s got some of our happiest and most jovial songs. It’s got some of our saddest and angriest songs. We’re expanding what we do. It’s exciting.” Every move has ushered them closer to this point. Re-envisioning what pop can be in the 21st century, AJR unassumingly emerged as a ubiquitous hit-making outlier and one of the biggest indie bands in the world. Since 2012, they’ve generated billions of streams and earned one triple-platinum single, one double-platinum single, four platinum singles, and one platinum album. 2019’s Neotheater marked their biggest first-week debut, bowing at #8 on the Billboard Top 200, #1 on the Top Alternative Albums Chart, and #1 on the Top Rock Albums Chart. Cemented as part of the modern zeitgeist, Spotify touted “Sober Up” [feat. Rivers Cuomo] among the “Best Rock Songs of the 2010s,” while Apple Music included “Weak” on its “Best Alt Songs of the 2010s.” Not to mention, they remain one of the “500 Most-Listened to Artists” on Spotify. On the heels of Neotheater, they dropped the 2020 platinum blockbuster “BANG!”, which they performed on TODAY, The Ellen DeGeneres Show, and even at the Macy’s Thanksgiving Day Parade. Most importantly, it set the stage for OK ORCHESTRA. “We were supposed to go on tour, and we wanted one new piece of music to play,” Ryan continues. “‘BANG!’ was intended for a Deluxe Edition of the last album, but it didn’t sound like the rest of the record. We felt like it wasn’t the period at the end of Neotheater, but rather the introduction to the next chapter. Around the Pandemic, we cancelled everything, but the song started to react anyway. It was the soundtrack to this weird end-of-the-world feeling we were going through. We decided we weren’t going to sit around and feel bad for ourselves, so we chose to use the year productively, dive in, and write our next album. We thought, ‘Let’s emerge from this Pandemic with something we’re proud of’.” They hunkered down and crafted what would become OK ORCHESTRA throughout 2020. Ryan and Jack share an apartment, while Adam lives down the street, so they maintained a rhythm of writing and recording. “I think we definitely got closer,” says Ryan. “In times like these, you realize what values are important. There are a lot of things you can live without, but you can’t live without family.” They teased out the record with “Bummerland” and “My Play.” However, the single “Way Less Sad” illustrated the scope of OK ORCHESTRA. Bass-y piano resounds through boisterous horns and stadium-ready chants before the song slips into a catchy chorus, “I ain’t happy yet, but I’m way less sad.” “We thought about how everyone is feeling right now,” he goes on. “We’re not all doomed anymore—like we were last year—but we’re not all better either. It’s an anthem for settling and celebrating the small wins. We included all of these little personal anecdotes to extremely AJR-ify it.” On “3 O’Clock Things,” ragtime piano drives a jazzy groove towards clever observations such as, “It’s kind of funny how I paid for college, when YouTube was an option.” “I’m going through all of these weird observations about dating, politics, and leaders,” he admits. “For as dark as it seems, it was one of the most fun songs to write.” At the same time, they get personal on “Humpty Dumpty.” Ryan reveals, “It’s about Jack’s struggle with showing his feelings as a regular person, yet balancing his life as an artist. Do you cry in front of people? Or does that ruin the magic? It even addresses his struggle with anxiety and the panic attack he had on stage. It was a very vulnerable moment.” Nodding to a lifelong passion for Broadway classics such as Les Misérables, Wicked, and The Phantom of the Opera, a voiceover overture introduces the album and sets the stage for a cohesive narrative. “We’re leaning into our Broadway roots,” he says. “It’s something we never lost our passion for. We love big hooks and unapologetic emotion. We dabbled in it on Neotheater. With OK ORCHESTRA, we went all out in the most fantastic way possible.” In the end, AJR welcome you into their world with open arms. “On these songs, we asked a lot of tough questions that could make some people uncomfortable,” Ryan leaves off. “I hope it sparks a discussion. I hope people start asking their own questions. I know our fans are ready for it. We don’t have a demographic; we have a friend group. There are grandmas, college kids, little kids, and a lot of dads. We’re the friend who’s weird, arty, and relatable. We’ve created a community. Now, we have a place for everyone to go in OK ORCHESTRA.”