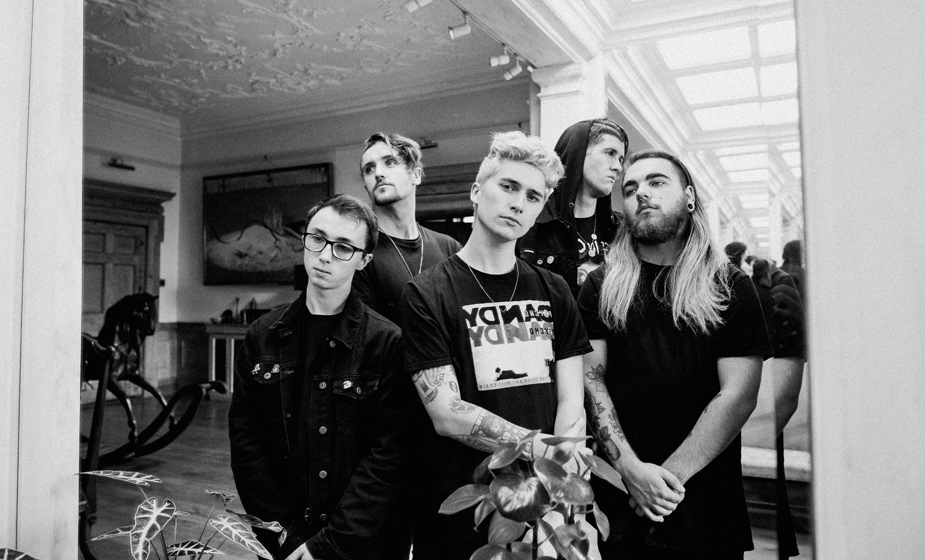 Love. It’s an emotion that rules our lives whether we like it or not. It can make us feel like we can take on anything or feel like every single breath we take is wasted. It can make your stomach fill with butterflies and your eyes fill with tears. It consumes us when we least expect it and disappears without a warning. Love is everything in this life and there’s nothing we can do about it. Holding Absence understands, appreciates and adores this sentiment and delves into the murky depths of it on this, their self-titled debut full length. A record ultimately 2 years in the making, it is a body of work that pulls on the heartstrings from all directions with total ease and one that saw vocalist Lucas Woodland pushed to the absolute limit of his emotional capabilities. “Love is the strongest emotion in the world. It really does make the world go round. After previously writing a couple of songs about love I realised that a great way to make this album would be to document a relationship from start to finish. I know that it sounds very playground but I really wanted to get into the nitty gritty of everything. This band has meant that I could delve into certain emotions that you only feel at certain times in life and I feel as though we touch on a lot of topics that people don’t really have the patience to talk about.” From the looking back on a love that has diminished due to the effects of mental health (‘Perish’) to the struggles of asking your partner to help you through your darkest of days (‘To Fall Asleep’) all the way through to watching a love you once had burning to a crisp before your very eyes yet still feeling grateful that it even happened (‘Wilt’), ‘This Is Holding Absence’ leaves no stone unturned when it comes to the ebb and flow that is so prominent within the concept of love while maintaining a beautifully desolating atmosphere throughout. Following on from a series of critically celebrated singles that saw them develop a passionate, rampant and devoted fan base in the blink of an eye, the band started work on their debut full length back in February of 2018. Returning to the studio with George Lever who was at the helm of ‘This Is As One’, the band’s split EP with Liverpool’s Loathe, it wouldn’t be completed until August. Off the back of a sudden member change, it was a case of realising that the most beautiful things come from just letting things happen naturally. “When we first went to record it was with our old guitarists so the dynamic was a little different. I feel like we were ready and impatient to really start this body of work but I think we were maybe running before we could walk so we needed to sit down and take some time. Then unexpectedly, we then spent a long part of this album as a three piece. There were a good few songs written without a guitarist even in the band. Finally finishing this record turned out to be such a heavy experience. There were weeks when I would do absolutely nothing, just read over the lyrics and overthink absolutely everything. It was self-destructive in a way and I knew that I had to sacrifice for it.” Though with the uncertainty behind them and once again a full line up, completed by now permanent guitarists Scott Carey and Chris Smitheram, bassist James Joseph and drummer Ashley Green, the band are ready to take the scene by the scruff and make everyone feel just as strongly as they feel. Because after all, that’s what this is all about. “Everything has to mean something. There is so much emotion in the world right now. This band has always had a clear vision and a clear message and regardless of who portrays the message and when it was portrayed and how it was portrayed, Holding Absence is always going to be about feeling as much as you can. Vocally, I’m just a vessel. I can’t write songs for everybody so I just want to write music that makes people feel in whatever way they can.” To feel is to be human and to be human is the most pure thing we have in this life. By breaking down the barriers of what we feel everyday, Holding Absence are diving into the deepest corners of our psyche and pulling out feelings that we didn’t even know we had the capacity to conjure. In many ways, this band is merely a catalyst for something much bigger than just guitars and bass and drums and words, and that’s something that Lucas has realised more and more as time has gone on. “Someone once came up to me and said that Holding Absence is the sound of every big emotion I have ever felt, all of the happiness and all of the sadness. It made me think that there is so much more to this than just making music.” With this mantra in place, 2019 is set to be absolutely huge for the band. Finally with a record that represents perfectly why they came to exist in the first place and ambition as far as the eye can see, Holding Absence are ready to become your entire world while also opening a whole new line of thinking for you in the process. “We have waited so long to have this album and to wear it on our sleeves and represent ourselves with a body of work. Having something to represent us rather than just hoping that people understand. I want this to be an hour of everyone’s time where they can reach inside my head and see these stories that I wanted to tell and portray and hopefully relate to.” This is Holding Absence